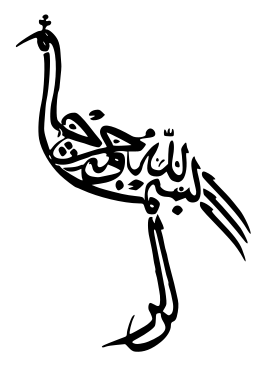 Part of the magic of Arabic calligraphy is that a skilled calligraphy can stack, intertwine, superimpose, and change the proportions and positions of words so as to obtain a recognizable shape of the sentence or phrase that is written. Here to the right is an example from the Wikipedia page on Islamic calligraphy in which the artist has written a phrase in the shape of some sort of bird. The phrase here is بِسْمِ الله الرَّحْمن الرَّحيم   bismi l-laahi r-raḥmaani r-raḥiim ‘in the name of God, the Benevolent, the Merciful’.

Recently a student of mine (شكرًا يا بروك!) shared this page of artwork with me. In each picture, the artist Mahmoud Tammam has written a single word (usually the name of an animal) in such a way that it depicts its meaning. So, for example, the word حُوت  ḥuut ‘whale’ has been written in such a way that it looks like a whale. These pieces of artwork are particularly accessible for the beginning learner of Arabic because at the bottom of each of them you will find the word written in normal Arabic (albeit unvocalized) with its translation in English next to it.

If you already know the names of some animals in Arabic, you may find some differences here. For example, in the artwork on this page the masculine word قِطّ  qiṭṭ is used for ‘cat’ rather than the feminine form قِطَّة   qiṭṭa that you might know. Both forms are used as the generic word for ‘cat’. The same is true of بَطّ   baṭṭ and بَطَّة   baṭṭa for ‘duck’.